For the first time a group of colleagues took part in the company run Bremerhaven and was immediately successful! 28 runners of the J. H.K. Group had come to the Nordsee-Stadion Bremerhaven to take part in the 4th Bremerhaven company run. “Bei J.H.K. läuft’s” (meaning “we have it going on”) could be read on the race shirts. 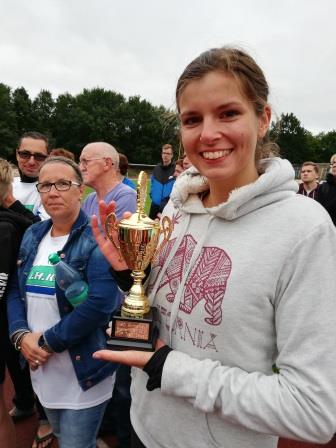 G. He had made the distance of 6 km in less than 28 minutes. Without any failure all participants reached the finishing line, cheered on by their fans.

And the effort was worth it: as a top team within the group of companies with 201 - 500 employees, our group received the trophy! And as top team captain, Lea Nörmann, HR Specialist Recruiting of J. Heinr. Kramer Holding, who had taken over the organisation of the company run for the J.H.K. Group, was drawn by lot.

Next year we will be there again!